Video Notes: The video referred to the first note of the scale as the root. It is, but for our purposes, we'll refer to it as the 1.

The video showed how each note of the scale is assigned a number. For our purposes, every number will represent a major chord unless marked otherwise. For example, if the song is in the key of A, the 1 will be A and the 6 will be F#. If you see 6, that's an F# major chord - if you see 6m, that's a F# minor chord. There are other notations that represent something other than a major chord - there is a list of those included in the next section.

There are times where the numbers will represent notes instead of chords. The 17 chord (1 with a dominant 7th) is an example that we use all the time. If you see a chord with multiple numbers in it, there's a simple rule to follow. The first (and usually largest) number is the chord, any other numbers (normally superscript) after that represent notes.

In the case of the dominant 7th chord, it's unique in that the 7th is flat - that would normally be marked with the flat symbol to indicate that it's flat. To contrast, the major 7th chord is marked as 1Maj7. If that's confusing, let's look at the actual notes involved and we'll use the key of G as our 1.

For the major 7th chord, that will be noted as 1Maj7 and the 7th isn't flat so the notes would be G-B-D-F#.

We use a fairly repetitive set of chords each week. If we have a song with an unusual chord, one of the leaders will map it out on the sheet.

Whatever key/scale the song begins in is the 1 and it stays the 1 unless you see a note on the sheet changing the key.

For example, All Creatures of Our God and King begins in C but has a key change to D after the second verse. On the sheet, you will see a text note that says "Mod + 1". That means that we are going to change keys by going up 1 whole step (C-C#-D). In the event the key was going to change only a half step, the text note would be "Mod + 1/2".

Once you see that text note changing the key, any 1's after that will be the new key/scale and all of the other numbers will adjust accordingly.

Here's part of the sheet for All Creatures and we'll look at verses 2 and 3. Verse 2 is the normal format we have been using and verse 3 is the number system. What's important to note is that in the number system, verse 2 and verse 3 would look almost identical. The Mod + 1 note is what changes the key for verse 3.

Let all things their Creator bless, And worship Him in humbleness

All the redeemed washed by His blood, Come and rejoice in His great love

Christ has defeated every sin, Cast all your burdens now on Him

Using the Chromatic Circle, the Circle of 5ths (to determine flats or sharps), and any of the instrument maps below to complete the following:

Remember to use the pattern W-W-H-W-W-W-H to find the notes in each scale. The answers will be at the bottom of this page. 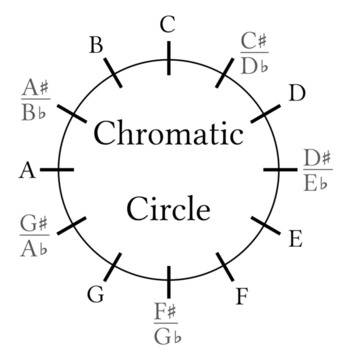 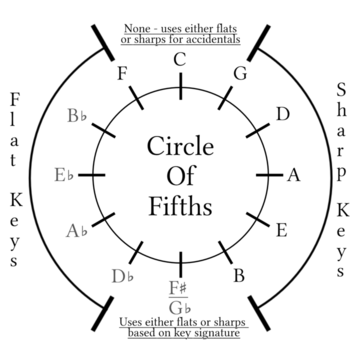